Kelly and I have been moving since Friday morning. Got a new place with lots more space. When I started with REAL and began working from home, it quickly became obvious that I needed my own space. The apartment complex we were in has some very nice townhouses, so we put our names on the waiting list for one of those. That was in June.

A few weeks ago, an apartment came available and we were next on the list. However, the manager had informed us that she wouldn't give us the apartment because of our rabbits. It was really just an excuse not to transfer an existing tenant so she could find a new one and not leave a vacant apartment. I came to this conclusion after checking with some neighbors who have caged animals, did not get permission for them, and were certain the manager was aware of the pets. In fact, despite the complex's no pets policy, some tenants have cats, one or two even have dogs (and not tiny, or medically necessary ones.)

The place was mismanaged anyway. It only took us just over a week to find and get approved for a new place. We would have done it much sooner, had we known it wasn't going to work at the old place.

So we're moved in now, still have much to go through, but I have the computers setup in my office. That's the common name, though the more maniacal and my preferred name for it is "The Lab". This is were the magic happens:

From left to right: My Linux PC, built entirely from spare parts laying around. Has a Windows drive for playing Battlefield with my brother in law. Then my Windows PC, loud and powerful. I really need to water cool the thing, it sounds like the world is coming to an end when running. But it's powerful enough to tear through any game, even Crysis. Equipped with a Logitech G15 Keyboard, and a G5 Laser Mouse. Then my laptop. It's a MacBook, nothing special to comment on there. And finally, the iMac which REAL provided me, where I do all my real work. I attached my own Cinema Display to it. The two PCs definitely come in handy for testing and debugging though. Both have copies of REALbasic installed one each too. Let me tell you, remote debugging is swell and all, but nothing beats working directly on the target computer when you're trying to test something platform-specific.

I love it. Still shopping for some great stuff from ThinkGeek. I'd love a bunch of TIX clocks, but at $40 a piece, I may just stick with one. I love the stuff that'll confuse guests. I wear my recursion shirt all the time.

Anyway, that's it for now. I've got a couple more posts coming the next few days, but only one of which is related to REALbasic though. I'll have more on-topic stuff soon, don't worry. 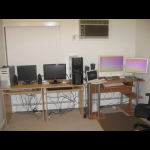