I consider myself a bit of a gamer. I have, until now, kept it mostly secret to the outside world that a) I have a PC, and b) I use it to play games. Let's face it - the Mac sucks for games. Completely and utterly terrible. Everything else, and you wouldn't hear me say enough good things about the Mac. But gaming? No way, at least not until Apple makes a truly customizable Mac.

But we won't get into that today.

What I've done here is one of those "Holy crap that was a good idea" moments we all like to have once in a while.

I bought a DVI-to-HDMI cable and an Optical Audio cable to plug my PC into my home theater system. Playing games like Battlefield 2142 and Crysis on it were very satisfying - enough to re-cement my feet into the "I hate Xbox and PS3" blocks once again.

Then I tried some options to really utilize my setup here. Supreme Commander's dual-screen support would be awesome. I knew it would be cool, but I underestimated my system. I put the main action at full detail - and I mean everything, even 16x Anti-Aliasing, on my HDTV at full 1920 x 1080 resolution AND the map view on the second screen at 1280 x 1024 without slowing down my video card.

I nearly wet myself when I started playing this. I wasn't just making things bigger to fit on the screen like the other games, I was actually rendering more content on the TV.

My only complaint is that I need to put the screen setup in a quite unusable mode before playing, and switch back when done. If only the NVIDIA Control Panel supported quick profile changing.

Oh, and one last thing - the G15 keyboard by Logitech is also overly cool and useful. 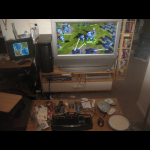